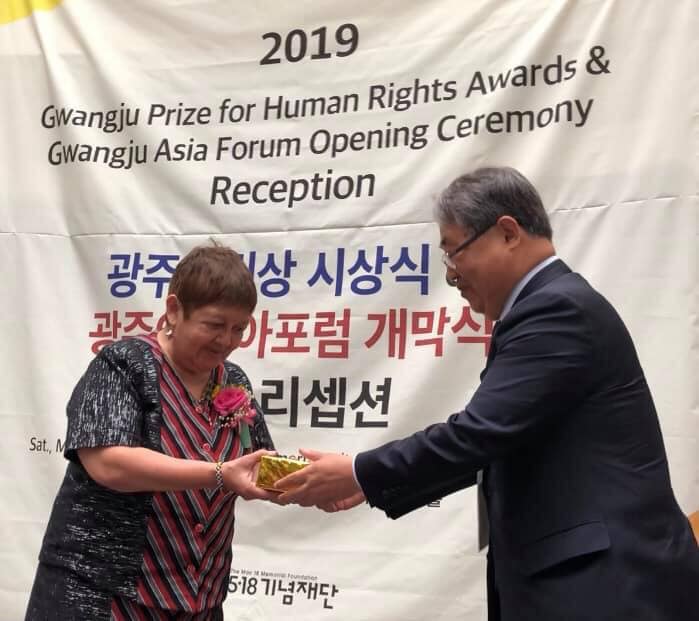 The Center for Development Programs in the Cordillera (CDPC) salutes one of its pioneers, Joanna Patricia K. Cariño for  having been conferred the prestigious 2019 Gwangju Prize for Human Rights on May 18 in Gwangju South Korea. The Gwangju Prize for Human Rights is given once in every two years by the May 18 Memorial Foundation to an individual whose exemplary contribution for the defense and promotion of human rights and democracy had a significant impact for the improvement and advancement of human rights, democracy and peace in their own country in Asia. It commemorates a 1980 pro-democracy movement by the people of Gwangju against brutal State military forces.

Joanna Cariño is an Ibaloi human rights activist, a pioneer and current member of the advisory council of the Cordillera Peoples Alliance (CPA). She is also the chairperson of SELDA-North Luzon, the organization of political detainees during the Marcos dictatorship in the 1970s and co-convenor of SANDUGO, the national alliance of indigenous peoples and Moro for liberation and self-determination.

Quoting from a CPA statement Cariño is an “esteemed pioneer of the indigenous peoples’ movement not only in the Cordillera but also in the whole country. She has dedicated her whole life serving the marginalized indigenous peoples and fighting against tyranny and dictatorship and the national oppression of indigenous peoples.”

CDPC is affirms Joanna’s statement that “Human rights make us human. With every violation of human rights, our humanity is diminished. The human spirit can only take so much oppression, however, before resistance develops. Repression breeds tyranny, and to rebel against an oppressive system is justifies.” Salute from CDPC! 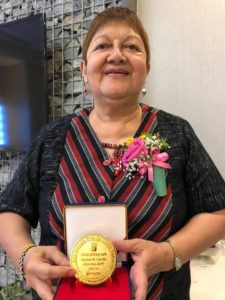 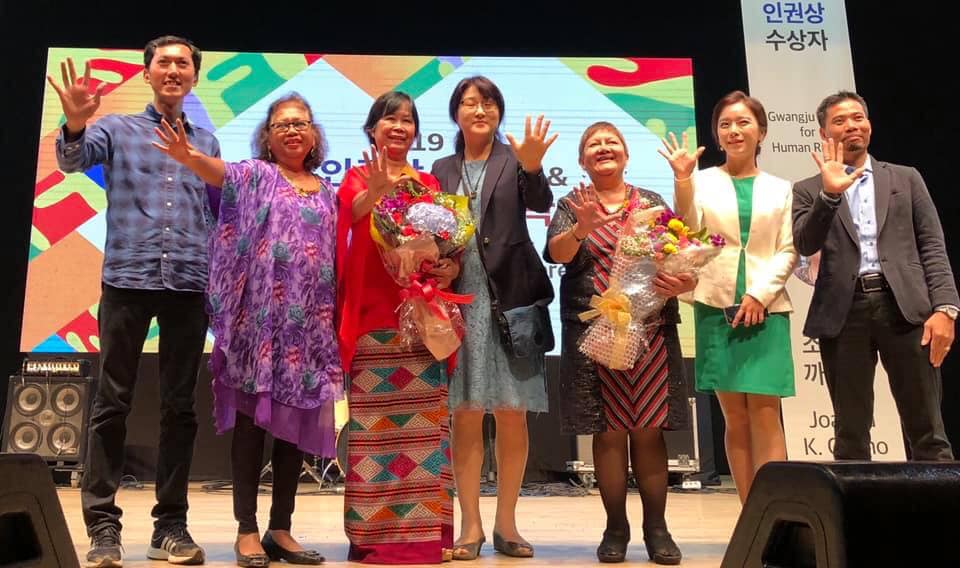 Joanna K. Cariño has been a human rights defender her whole life. She was a student activist when martial law was declared  in the Philippines  in 1972. She was a survivor of martial law, having been tortured and illegally detained for two years under the Marcos dictatorship from 1974-1976. With this background, she helped set up the Northern Luzon chapter of SELDA (Samahan ng mga Ex-Detainee Laban sa Detensyon at Aresto), the organization of former political prisoners in the Philippines of which she currently serves as chairperson.

Most of Cariño’s work has been in the defense and advancement of indigenous peoples’ rights and human rights, and contributing to the Filipino people’’ struggle for national freedom and genuine democracy. She was among the founders of the Cordillera Peoples Alliance for the Defense of the Ancestral Domain and Self-Determination (CPA) in 1984 and has worked fulltime with this organization for more than three decades. In 1986, she helped organize a delegation of indigenous peoples led by CPA that held a dialogue with then  President Cory Aquino for the recognition of indigenous peoples’ rights and lobbied the Constitutional Commission for the inclusion of provisions on ancestral land and regional autonomy in the new constitution

Cariño is known to be a fierce indigenous woman activist from the Cordillera who fought the Marcos dictatorship from 1972-1986 and continued to fight against various forms of human rights violations especially among indigenous peoples at local and national level. Because of the repressive political climate in the Philippines, there have been threats to Cariño’s security and other leaders of CPA through the years. In 1992, Cariño was among a group of 14 people who were arrested without warrant and brought to the Police headquarters in Camp Crame. They were released after two days of detention with no charges filed against them. Many times, Cariño noticed increased surveillance of her movements. There is continuous political vilification and red-tagging of the CPA and its leaders, including Cariño. She has been included in the so-called Order of Battle of the Philippine military, as reported in the Philippines mission report of then UN Special Rapporteur on Extra Judicial Killings, Philip Alston, in 2008.

In February 2018, the Philippine government, through the Department of Justice, has filed a petition to proscribe the Communist Party of the Philippines and New People’s Army as terrorist organizations. The petition included Joanna Cariño along with past and present leaders of CPA in a list of 657 names that the Philippine government aims to declare as “terrorists,” whereas there is nothing in the petition which will link Cariño and other CPA leaders with the alleged terrorist acts. In July 2018, Cariño’s lawyer filed a motion with the court to dismiss the unwarranted charges against her. To date, there has been no progress on the motion filed in the court. On October 30, President Rodrigo Duterte ordered the Department of Justice to pursue the proscription case.

Cariño’s name was also included in a memorandum released by the Philippine National Police Intelligence Group on May 28, 2018, directing the country’s police officers to provide a summary of information (SOI) on alleged leaders of the New Peoples Army. In the experience of activists in the Philippines, the lives and security of those included in the government’s lists of alleged terrorists and leaders of the New Peoples Army is constantly endangered. The threat of extra-judicial killing, enforced disappearance, trumped-up charges, arrest and detention is real. Hence, human rights activists in the Philippines have to be prepared to be persecuted, as Cariño does.

For more than three decades, Cariño  demonstrated true heroism in upholding human rights, national freedom and democracy and self-determination of indigenous peoples. From her student days to her senior citizen age and despite threats to her life, Cariño courageously and tirelessly campaigns against the militarization of indigenous communities, various forms of human rights violations, and for the self determination of indigenous peoples. Under the current fascist regime of President Rodrigo Duterte, Cariño is even more fervently campaigning against the trampling of democracy in the Philippines, martial law in Mindanao and threat of nationwide martial law, Duterte’s war on drugs and war against the poor people, and the regime’s vehement attacks against indigenous peoples. On top of the many organizations that she is part of and helped establish, she is also actively taking part in the national Campaign against the Return of the Marcoses in Malacanang (CARMMA) since 2016. She helped organize the Cordillera Movement Against Tyranny, which was launched during the annual Cordillera Day celebration in April 2018.

Cariño is a long time educator, writer and researcher. She was a faculty member in Anthropology and Economics at the University of the Philippines Baguio from 1980-85. She left the academe to become a fulltime activist at the height of the struggle against the Marcos dictatorship. She was the founding Executive Director of the Cordillera Consultation and Research, which transformed into the Cordillera Resource Center for Indigenous People’s Rights. Throughout her life as an activist, she has conducted numerous education and training programs for indigenous people’s organizations, not only among the Igorots of the Cordillera region but also among the Lumad indigenous peoples in Mindanao, Southern Philippines. She has also written numerous articles on the issues of the indigenous peoples, human rights, and national democracy, and have spoken before various audiences in the country and at the international level.  Many of these articles and speeches have been published locally, nationally and internationally. She was co-editor of two collections on Cordillera issues – Dakami Ya Nan Dagami (We Indigenous and Our Ancestral Land), 1983 and Ti Daga Ket Biag (Land is Life), 2010.

In recognition of her work in upholding human rights and the rights of indigenous peoples and national minorities, Cariño has received a number of awards, the latest of which was given by Philippine civil society organizations and the national Movement Against Tyranny in April 2018. She was also bestowed the Gawad Bangan 2018 (indigenous woman leader) Award by the Pi Sigma Delta Sorority and University of the Philippines Kasarian (Gender) in March 2018, and was awarded as one of the Outstanding Women Leaders of Baguio City for indigenous women’s empowerment in 2011. In September 2018, she was awarded a medal as human rights advocate and made honorary member of the Paris Bar Association during the Human Rights Defenders World Summit held in Paris, France ~Cordillera Peoples Alliance